COVID-19 UPDATE
Medical Scribes in the hospitalist setting, are they worth the investment? 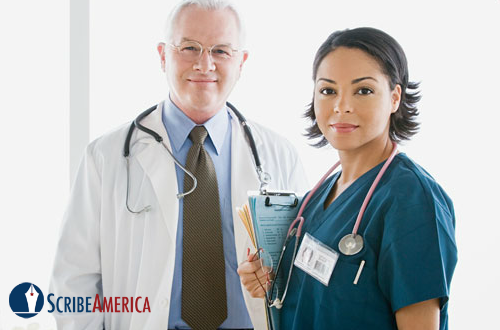 In most hospitals, medical scribes spend their days in the emergency department. There, time is always of the essence. Having scribes able to partner with doctors to help in such a fast paced environment is well proven to increase productivity, patient satisfaction, and HCAPS scores.

But as the popularity of medical scribes in the emergency setting has grown so has the role of a scribe. No longer are they an exclusive fixture of emergency departments. Pioneering medical groups have found that they can maximize resources and make doctors happier by having scribes assist in the inpatient role.

The transition to electronic health records (EHRs) in the American healthcare system has created a vast need for specialized help for doctors who struggle to pull double duty as both doctor and data entry clerk.

Evidence abounds of drops in productivity and doctor satisfaction following the installation of an EHR system. According to a 2012 survey of practices implementing EHR’s an average drop of 30 percent in productivity is not uncommon, but that drop can be as high as 50 percent in some cases.

Part of that productivity drop is that most physicians just do not enjoy using EHRs, and find them clunky. According to a survey from earlier this year conducted by health IT market researcher KLAS Enterprises the usability ratings for nine leading EHR systems on six common EHR tasks ranged from only 55 percent to 85 percent.

From good to great thanks to medical scribes

“We were seeing productivity lowered with the adoption of EHR’s, and seeing doctors dissatisfied with their day,” said Kreamer. “We solved those problems with medical scribes.”

The solution for Kreamer came in the form of medical scribes. Kreamer’s organization currently has a comprehensive scribe force working one on one with doctors at two of their affiliate hospitals, with considerations underway for bringing scribes to a third.

Since his organization began working with medical scribes, Kreamer says that overall productivity and physician satisfaction is up and his group has noted improvements in the doctor-patient interaction.

“Doctors can see more patients because they’re not burdened so much with the EHR. It’s a more efficient use of our resources,” said Kreamer. “When a physician is speaking his chart notes, it can also lead to the exam being more of an engagement instead of an interaction with the patient.”

Kreamer and his group have the numbers to prove it too. In the time that they have been using scribes at those hospitals their Case Mix Index (CMI) numbers have increased by 9 percent at one hospital and by 15 percent at another with no other noticeable change in the patient base.

Confidence for the future

The medical scribes are also giving Kreamer confidence for the future of his business. Many practices like his will be faced with a big challenge next October when the new set of medical codes known as ICD-10 take effect. The federally mandated changeover to the new codes will likely squeeze many practices as they strain to get their doctors trained up on the codes while also attending to patients. But not Best Practices Inpatient Care. Kreamer says with the scribe power he now has, he’s not worried at all about the ICD-10 switchover.

Not to mention his staff of skilled hospitals are now able to easily switch from one hospital to another with no fears of having to learn a completely new EHR system.

“You’re able to take a doctor who doesn’t know the hospital, that has a different EHR system, and they can still do their job just as effectively,” said Kreamer. “You can be almost system agnostic and get it done.”

When asked about the future, Kreamer believes that medical scribes are here to stay. “I cannot imagine running a program without it,” he said.

With better provider productivity and overall satisfaction, improved HCAPS scores, and a sizable improvement in the CMI, not only do the patients and providers win so do the hospitals bottom line.